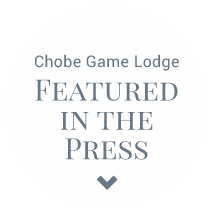 The Chobe National Park is home to a third of Botswana’s elephant population and we here at Chobe Game Lodge have a deep love and respect for these noble creatures.

Earlier this year, reports that several hundred elephants were found dead in the North West Okavango Delta region took the world by storm. The cause of death was not apparent straight away, and specialists could not accurately assume what may have led to this catastrophe in an isolated area like this, without an in-depth investigation.

The Botswana Government swiftly stepped in and invited scientists from South Africa, Zimbabwe, Canada and the USA to join the Department of Wildlife and National Parks in analysing the scenes and taking samples for testing to try and determine the exact cause of death.

From an early stage there were suspicions that the elephants could have been affected by something in the water in the area, but other causes such as poisoning or anthrax were not ruled out.

This led to widespread coverage of the investigation which has taken several months but has now been concluded.

The cause of death has been identified as a toxic bacterium, cyanobacteria, which is made by microscopic algae in water.

While we are devasted by the loss of so many elephants, this news comes as a relief to many conservationists fearing that there was human involvement.

Botswana is considered a safe haven for wildlife and is home to a third of the African Elephant Population, so any and all incidences are treated with the utmost severity.

You can read the full BBC article here.

Chobe National Park is one of Botswana’s iconic pa...

The Chobe National Park is home to a third of Bots...

While there may not be many people around to see t...

A Visit to Albert’s Farm in the Chobe Enclave

You all know Albert! One of Botswana’s longest ser...

In the midst of negative news surrounding COVID-19...

Your journey to Chobe starts here